January is a cold month of waiting. We who have been through many Januaries know that eventually the warm world will burst forth again; but what if January is all you’ve ever known? That’s the question asked by Philip Larkin in “First Sight,” our homeschool poem-of-the-week for this first week of the new year, offered for all things born in January.

Lambs that learn to walk in snow
When their bleating clouds the air
Meet a vast unwelcome, know
Nothing but a sunless glare.
Newly stumbling to and fro
All they find, outside the fold,
Is a wretched width of cold.

As they wait beside the ewe,
Her fleeces wetly caked, there lies
Hidden round them, waiting too,
Earth’s immeasureable surprise.
They could not grasp it if they knew,
What so soon will wake and grow
Utterly unlike the snow.

Philip Larkin (1922–1985) was one of the best-known English poets of the twentieth century. Although he was not a prolific writer, the small volumes of prose and poetry that he published received wide acclaim and have been appreciated by readers for decades. Very few people, even in the top tier, ever make a living from writing poetry, and Larkin was no exception: he spent most of his career working as a professional librarian, principally at the University of Hull in the north of England. 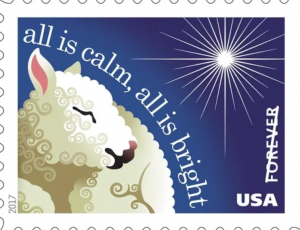 Larkin was a poetical master craftsman. Although his poems use ordinary language, they are often quite tightly structured, as you can see in the above example. Have your students count syllables: I find exactly seven in most lines and eight in just two. Look next at the rhyme-scheme: snow–air–know–glare–fro–fold–cold. I make it out to be ABABACC. Note also that the seven lines in both stanzas are divided in exactly the same way: one sentence for the first four lines, and then a second sentence for the last three. And he uses the same word, snow, at the end of both the first line and the last line, tying the whole poem together like a package with a string around it.

Many of Larkin’s poems have a prose-y feel to them because he often employs enjambment — the carrying over of a sentence or idea past the end of the line. We saw another good example of that technique earlier this school year in the poetry of Elizabeth Jennings. (“Enjambment” is a beautiful ten-dollar literary word that your high-school homescholars can latch onto.)

As you walk through the winter landscape this January, invite your students to think about all the life hidden around them: frozen roots, dormant seeds, sleeping caterpillars, mice in their burrows — all waiting to wake and grow.

What wonderful words and poetical productions are you studying in your homeschool this Orion Term? 😊

❡ Literary lives: The website of the Poetry Foundation includes biographical notes and examples of the work of many important poets (including Philip Larkin) that are suitable for high school students and homeschool teachers. 🖋

❡ What so soon will wake and grow: If a special line or turn of phrase happens to strike you in one of our weekly poems, just copy it onto your homeschool bulletin board for a few days and invite your students to speak it aloud — that’s all it takes to begin a new poetical friendship and learn a few lovely words that will stay with you for life. 😊

❡ Here, said the year: This post is one of our regular homeschool poems-of-the-week. Add your name to our River Houses mailing list (riverhouses.org/newsletter) to get posts like these delivered right to your mailbox, and print your own River Houses Poetry Calendar (riverhouses.org/calendars) to follow along with us as we visit fifty of our favorite friends over the course of the year. 📖

On the first Saturday of every month we post educational skywatching notes for the homeschool month ahead. Here’s the monthly northern hemisphere night-sky review for January 2021 from the Hubble Space Telescope’s website — it features (among other things) our term namesake, Orion, as well as last month’s and this month’s great stars, Aldebaran and Capella:

And here’s another January night-sky review, courtesy of NASA’s Jet Propulsion Laboratory in California — it features this month’s planets and a special opportunity to view Uranus on the 20th:

One of the easiest astronomical exercises you and your students can do each month is print out your own free copy of the current two-page Evening Sky Map and monthly sky calendar available from skymaps.com:

Each map includes a constellation chart for the month as well as a schedule of upcoming astronomical events and an astronomical glossary. (Monthly maps for the southern hemisphere and the equatorial regions are also available.)

The best stargazing nights in January will be toward the middle of the month: the moon will be new (and the sky darkest) on the 13th. As always, you can look up the moon’s phases in your River Houses almanac (riverhouses.org/books) and also on the timeanddate.com website. 🌑🌓🌕🌗🌑

January is the middle month of Orion Term, the second of the four terms that make up the River Houses homeschool year. Our Great Star for the month of January is Capella (alpha Aurigae), the brightest star in the constellation Auriga the Charioteer, which we’ll be writing about next week. Print your own River Houses Star Calendar (riverhouses.org/calendars) and follow along with us through the year as we learn about twelve of the high lights of the northern hemisphere night sky. 🌟

What celestial observations will you and your students be making in your homeschool this January? 😊

❡ All the star-sown sky: Teaching your students to recognize the constellations is one of the simplest and most enduring gifts you can give them. Our recommended backyard star guide and homeschool world atlas (riverhouses.org/books) both contain charts of the constellations that will help you learn your way around the heavens. Find a dark-sky spot near you this month and spend some quality homeschool time with your students beneath the starry vault. ✨

❡ The starry archipelagoes: For a great weekly astronomical essay, perfect for older homeschoolers, pay a visit to “The Sky This Week” from the U.S. Naval Observatory. These well-written pages, posted each Tuesday, usually focus on one or two special astronomical events or phenomena. If you have high school astronomy students, have them read these pages aloud to you each week, or ask them to study them and then narrate a summary back to you. 🌌

❡ Make friendship with the stars: This is one of our regular Homeschool Astronomy posts. Add your name to our free River Houses mailing list (riverhouses.org/newsletter) and get great homeschool teaching ideas delivered right to your mailbox every week. 🔭