You are here: Home > Homeschool Arts & Music > This Post

Monday is Memorial Day in the United States, the day we remember the nation’s war dead. Why not let some undergraduates from one of the most selective colleges in the country — the United States Military Academy at West Point — assist you and your students in your remembrance this weekend (with words and music from Randall Wallace and Nick Glennie-Smith):

For homeschoolers, everything is an opportunity for learning: holidays, history, songs, singers, and place names. Can your students find West Point, New York, on a map and explain its significance? 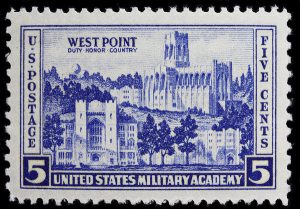 Although “West Point” is now shorthand for our national military academy, the name West Point in its original sense refers to the high point of land that projects into the Hudson River just a few miles north (upstream) from New York City. The point forces the Hudson to make a sharp bend, and artillery placed there can easily control all traffic on the river. West Point was first fortified during the American Revolution and it has been occupied by the United States Army ever since. The Hudson River–Lake Champlain–Richelieu River corridor between New York City and Montreal (on the St. Lawrence River) was one of the most contested military and commercial transportation routes on the North American continent for almost 200 years. Plate 44 in your River Houses atlas will show you the location of West Point and let your students get a sense of its geographical importance.

You can also remind your students this weekend that what we now call Memorial Day was originally called Decoration Day after the custom of decorating the graves of soldiers who had fought in the Civil War. The name has changed, but the honorable custom continues, as you’ll see if you visit almost any cemetery across the country in the next few days.

Henry Wadsworth Longfellow’s 1882 poem “Decoration Day” shows us why Longfellow was the most popular poet of nineteenth-century America. Why not share it with your homeschool students also on this Decoration Day weekend.

Sleep, comrades, sleep and rest
On this field of the Grounded Arms,
Where foes no more molest,
Nor sentry’s shot alarms!

Ye have slept on the ground before,
And started to your feet
At the cannon’s sudden roar,
Or the drum’s redoubling beat.

But in this camp of Death
No sound your slumber breaks;
Here is no fevered breath,
No wound that bleeds and aches.

All is repose and peace,
Untrampled lies the sod;
The shouts of battle cease,
It is the Truce of God!

Rest, comrades, rest and sleep!
The thoughts of men shall be
As sentinels to keep
Your rest from danger free.

Your silent tents of green
We deck with fragrant flowers
Yours has the suffering been,
The memory shall be ours.

Longfellow’s “Decoration Day” is a fine example that you can use to teach about extended metaphors in literature. The poem draws an imaginative comparison between soldiers sleeping on their battlefield campgrounds at night, and the rows of graves in the burial ground covered by “tents” of green grass. See how many specific contrasts and comparisons your students can identify (the contrast between the trampled ground of the battlefield and the untrampled ground of the burying field; the comparison between the sentinel guards on the battlefield and all of us as guardians of memory on the burying field; and so on).

What other educational and historical anniversaries did you study in your homeschool this Leo Term?

❡ Stay up to date: This is one of our occasional Homeschool Holidays & Anniversaries posts. Add your name to our weekly mailing list and get great homeschool teaching ideas delivered right to your mailbox all through the year. 🗞