Today is the Ides of March, the famous day on which the dictator Julius Caesar was assassinated in 44 B.C. by members of the Roman senate. Our homeschool poem-of-the-week for this Ides of March week is a reflective commemoration of that event by Constantine Cavafy called, naturally enough, “The Ides of March,” and translated here from Cavafy’s original Greek by Edmund Keeley and Philip Sherrard.

The Ides of March

My soul, guard against pomp and glory.
And if you can’t curb your ambitions,
at least pursue them hesitantly, cautiously.
And the higher you go,
the more searching and careful you need to be.

And when you reach your summit, Caesar at last —
when you assume the role of someone that famous —
then be specially careful as you go out into the street,
a conspicuous man of power with your retinue;
and should a certain Artemidoros
come up to you out of the crowd, bringing a letter,
and say hurriedly: “Read this right away.
There are important things in it concerning you,”
be sure to stop; be sure to postpone
all talk or business; be sure to brush off
all those who salute and bow to you
(they can be seen later): let even
the Senate itself wait — and find out at once
what important message Artemidoros has for you. 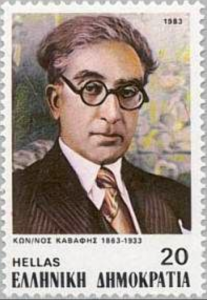 Constantine Cavafy (1863–1933) was one of the most prominent Greek poets of the twentieth century, and many of his poems are modern commentaries and reflections on ancient Greek and Roman literature.

Cavafy’s “The Ides of March” focuses on Artemidorus, a minor character in Shakespeare’s play Julius Caesar, who learns of the conspiracy and writes a letter to Caesar warning him of it. In Act 2, Scene 3, we see Artemidorus in private reading the letter aloud to himself:

“Caesar, beware of Brutus. Take heed of Cassius. Come not near Casca. Have an eye to Cinna. Trust not Trebonius. Mark well Metellus Cimber. Decius Brutus loves thee not. Thou hast wronged Caius Ligarius. There is but one mind in all these men, and it is bent against Caesar. If thou beest not immortal, look about you. Security gives way to conspiracy. The mighty gods defend thee!” (Julius Caesar, Act 2, Scene 3)

But when Artemidorus tries to get the letter to Caesar in the street he is rebuffed, and the warning is never heard. Cavafy’s narrator warns all people of ambition — and all of us — to heed the minor characters of the world: the news they carry may be the most important of all.

What wonderful words and poetical productions are you studying in your homeschool this Leo Term? 😊

❡ Et tu, Brute? For a quick homeschool review of the life and times of Julius Caesar, turn to page 108 in your River Houses history encyclopedia. 🗡