Happy June to all our readers and friends! Here are some things to look for in the homeschool month ahead. 🔍 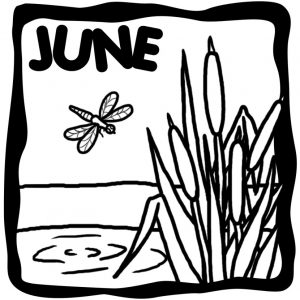 June with 30 days is the first month of Hercules Term, our summer term in the River Houses. Hercules Term runs from June through August. Visit our main calendar page (riverhouses.org/calendars) and print out some of our simple educational calendars and planners — they’ll help you create a light and easy structure for your homeschool year. 🗓

The month of June (Latin mensis Iunius) was the fourth month of the year in the earliest Roman calendars, which treated the beginning of spring in March as the beginning of the new year. The month’s name is usually said to be derived from Juno, queen of the gods and wife of Jupiter (although the Romans themselves were not always sure where their own month names came from, so ancient were they). You can learn more about different kinds of modern and historical calendars on pages 350–356 in your River Houses almanac (riverhouses.org/books). 📚

“A swarm of bees in June
Is worth a silver spoon.“

Our Sunday states-of-the-week for June will be Montana, Washington, Idaho, and Wyoming, and our countries will run from Somalia to Togo. Print your own River Houses States & Countries Calendar and tour the United States and the whole world with us from Delaware to Hawaii and Afghanistan to Zimbabwe. 🇺🇸 🌎

We’ll have homeschool poems this month from an anonymous medieval poet (for summer), Francis Scott Key (for Flag Day), Henry Wadsworth Longfellow (for Father’s Day), and Robert Louis Stevenson (for summertime play). Print your own River Houses Poetry Calendar and join us as we visit with forty-eight of our favorite friends over the course of the year. ✒️

Our Friday Bird Families this month will include the Wagtails and Pipits; the Fringilline Finches and Cardueline Finches; the Longspurs and Snow Buntings; and the Wood-Warblers. Print your own copy of our River Houses Calendar of American Birds, get out your copy of our recommended homeschool bird guide (riverhouses.org/books), and follow the flyways with us. 🦅

Our monthly Great Star for June is Spica (alpha Virginis), which we’ll be writing about next week. Print your own River Houses Star Calendar and join us as we visit twelve high lights of the northern hemisphere night sky and make them friends for life. 🌟

Our Dewey Decimal class for June is the Literary 800s — follow along with us (on the first Tuesday of each month) and help your students learn the whole library over the course of the year! 📚

And watch for our monthly Wikimedia Commons Photo Challenge post, coming up this week — it’s a great opportunity for all homeschool photographers. 📸

Also coming up this month:

And remember, it is and they do:

“It is the month of June,
The month of leaves and roses,
When pleasant sights salute the eyes
And pleasant scents the noses.“

What calendrical events will you be marking in your homeschool this June? 😊

Today is the beginning our summer term in the River Houses — Hercules Term — named for the Great Hero of the Heavens. Hercules Term runs from March through May.

We put great stock in the educational value of the calendar in the River Houses. The calendar is the framework on which we human beings hang most of the facts we know about the world: historical events, natural phenomena, personal reminiscences, the seasons, blooming flowers, migrating birds, the sun and moon, the planets, the stars. A key part of every student’s intellectual development is the development of “calendar sense” — a sense of time and history.

Our annual River Houses calendar (riverhouses.org/calendars) divides the homeschool year into four three-month terms (quarters) that correspond roughly to the seasons, and these terms are named after prominent seasonal constellations of the northern hemisphere:

This calendrical division is an open-ended idea that we’re developing for the River Houses, and we think has a great deal of educational potential. We’re looking forward to expanding upon it as time goes on.

As you think about your own homeschool year, think about how different parts of it — curricular, co-curricular, social, or recreational — might be informally arranged into these four terms. You could have a different decorating theme in your classroom each term, for example, or you could schedule a regular trip to a special place where you take a photo at the beginning of each term to track how the seasons change. You could group your curricular work by term, or bake a quarterly cake, or set goals at the beginning of each term that you want your students to have met by the end. You could have your students measure their height at the beginning of each term, or take their penny-jar to the bank for a quarterly deposit. At the end of each term you could assemble a portfolio of student accomplishments. With a little imagination you will be able to come up with a clever and comfortable arrangement and a new way to think about the structure of your educational year.

Hercules Term is named for the Great Hero of the Heavens, the son of Zeus and Alcmene, who is up in the southeast each evening now at sunset and will be passing high overhead throughout the summer. Hercules Term is home to Flag Day (14 June), Father’s Day (21 June), and Independence Day (4 July); to the anniversary of the first moon landing (20 July, which is also Gregor Mendel’s Birthday); and to the annual Perseid Meteor Shower (11–13 August) — not to mention countless other holidays, anniversaries, and events, local and global, public and private, that you may wish to mark on your own homeschool calendar. (And this year we’re also expecting a partial lunar eclipse on 4–5 July that will be visible over much of North America.)

If you want to make a special astronomical study this Hercules Term, your River Houses reference library (riverhouses.org/books) includes an excellent backyard guide to the night sky that will introduce you to Hercules and its most prominent stars:

“As one of the more prominent heroes of Greek mythology, Hercules has earned a central place in the sky — at least for those in the Northern Hemisphere — appearing almost directly overhead during the summer months. From mid-northern latitudes the warrior can be seen running east toward the Milky Way. Four stars in an approximate square make up the asterism known as the Keystone, similar in shape to the central stone in archways. Right next to bright Vega [our August star], Hercules is easy to locate, especially during the summer weeks when the constellation is at its highest. Though prominently positioned in the night sky, Hercules is a dim constellation that does not benefit from any notably bright stars and was once named “the Phantom.” Only three are brighter than magnitude 3. Rasalgethi, the alpha star, is a red supergiant that is visible to the naked eye.

“In Greco-Roman lore, Hercules was a half-mortal son of Zeus, famous for his amazing strength. He was driven mad by Hera, queen of the gods and Zeus’s wife, who was angered by her husband’s unfaithfulness. While cursed with insanity, Hercules took his family’s life. When the tragic spell lifted, Hercules was so overcome with grief that he undertook 12 labors to repent for his actions. Each challenge seemed impossible, but through strength and ingenuity Hercules overcame each one and was granted celestial immortality. Many of the creatures Hercules battles are the other constellations in the sky including Leo the lion, Cancer the crab, and Hydra the serpent.“ (National Geographic Backyard Guide to the Night Sky, pages 222–223)

Why not spend a little time out after dark with your students over the next three months and locate the Great Hero as he makes his nightly passage to the west. Once you learn to spot him, you’ll have a friend for life.

What educational adventures do you and your homescholars have planned for this Hercules Term? 😊

❡ Quarter days and cross-quarter days: Dividing the year into quarters is an ancient and natural practice: the annual movement of the sun across the sky automatically gives us two equinoxes, two solstices, and four seasons. Our four terms are just a simple modification of that arrangement so that our River Houses calendar will align more conveniently with the ordinary months — with the “meteorological seasons” rather than the astronomical seasons — and with the customary American school year. In many traditional calendrical systems, going back into the Middle Ages, the first day of each quarter is called a quarter day and the midpoint of each quarter is called a cross-quarter day. That means the quarter days of the River Houses year are 1 September, 1 December, 1 March, and 1 June, and the cross-quarter days are 16 October, 14 January (15 January in Leap Years), 15 April, and 16 July. (Fun fact: a vestige of the old system of quarter and cross-quarter days is Groundhog Day, also known as Candlemas on the Christian calendar: it’s the cross-quarter day between the winter solstice and the spring equinox.) Quarter days have for centuries been the traditional days on which school terms began, so homeschoolers who follow our four-term River Houses calendar are participating in a very ancient tradition indeed. 😊

❡ Watchers of the skies: Teaching your students to recognize the constellations is one of the simplest and most enduring gifts you can give them. Your recommended River Houses night-sky guide (riverhouses.org/books) has descriptions and maps of each constellation that point out the highlights, and the astronomical section of your recommended world atlas has beautiful large charts of both celestial spheres. Find a dark-sky spot near you this term and spend some quality homeschool time beneath the starry vault. 🔭

❡ Choose something like a star: If you’d like some more light and easy homeschool astronomy lessons, download and print a copy of our annual River Houses Star Calendar (riverhouses.org/calendars) and follow along with us month by month as we make twelve heavenly friends-for-life over the course of the year. 🌟