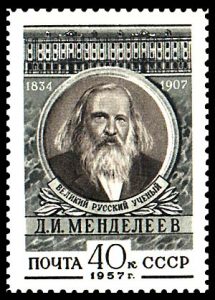 The father of the Periodic Table of Elements, the great Russian chemist Dmitri Ivanovich Mendeleev, was born on this day in a village near Tobolsk, Siberia, in 1834. Happy birthday, Dmitri!

Why not celebrate this analytical anniversary with a simple interactive history of the Periodic Table prepared by the American Association for the Advancement of Science — it’s quite suitable for homeschool high schoolers and advanced middle schoolers:

Or, if you’re looking for something less historical and more poetical, why not learn a haiku or two — there’s one here for every single element:

What scientific discoveries have you made in your homeschool this Orion Term? 😊

❡ Elementary, my dear Dmitri: This is one of our occasional Homeschool Holidays & Anniversaries posts. Add your name to our weekly mailing list (riverhouses.org/newsletter) and get great homeschool teaching ideas delivered right to your mailbox all through the year. 🗓

February is the third month of Orion Term in the River Houses, and as our monthly star calendar will tell you, February’s Great Star is the red supergiant Betelgeuse in the constellation Orion the Hunter, the star marking Orion’s left shoulder. Its formal designation is α Orionis — “alpha of Orion.” Orion and Betelgeuse are high in the east in the early evening now, passing over to the west as the night goes on.

Betelgeuse has been in the news quite a bit in the last few months because it has been acting very strangely. It is well known as a variable star, regularly dimming and brightening according to at least two overlapping cycles, but recently it has continued to dim and it is now less bright than at any time since modern photometric measuring methods were developed. We’ll start with a traditional description of Betelgeuse here, and then look at what may be going on with this nearby supergiant.

If you want to introduce your students to Betelgeuse and Orion, you can start with some basic astronomy and astronomical mythology from your backyard star guide (riverhouses.org/books):

“[Orion] may be the most recognizable constellation in the sky, visible worldwide from its position straddling the celestial equator and identified by different cultures across thousands of years. Its prominence earned it three references in the Bible as well as mentions in The Iliad, The Odyssey, and other literary classics. To modern sky-watchers, the hunter’s position is ideal for use as a reference point. Three of the sky’s 25 brightest stars are found in this group, and their brightness makes the structure of a man quite easy to see. The hunter’s bright belt is made of three stars, all around magnitude 2. His upraised, club-wielding arm sweeps into the Milky Way, while his other hand holds a shape interpreted as either a shield or a lion’s pelt.

“Orion’s main stars provide a way to orient yourself even amid the glare of city lights. Betelgeuse, the constellation’s alpha star, represents one shoulder. This huge variable star pulsates to a diameter between 300 and 400 times the size of our sun. Blue-white Rigel, the hunter’s foot, is a supergiant 57,000 times as bright as the sun.

“If Betelgeuse replaced the sun at the center of our solar system it would extend to the orbit of Jupiter. This supergiant star is 10 million years old and near the end of its life, expected to explode as a supernova anytime — within the next million years.“ (Backyard Guide to the Night Sky, pages 264–265)

That’s plenty for beginning students — your little lesson is done. If you want to get more advanced, the Wikipedia page on Betelgeuse is packed with additional information on everything from astrometry to cultural history.

Betelgeuse is a well-known and well-studied orange-red supergiant, conspicuously marking the shoulder of Orion. It is young star, about 8–10 million years old, and nearing the end of its short life-cycle. It has had, until recently, a regular double cycle of dimming and brightening caused by pulsations in the star’s gaseous structure.

Giant stars like Betelgeuse end their lives in massive explosions called supernovae, and Betelgeuse has been recognized for some time as a likely supernova candidate — and again, in astronomical terms, that means “it might explode sometime in the next million years or so.” But last year, astronomers noted that Betelgeuse had dimmed more than usual, and then kept dimming even further, leading to speculation that it might reach the supernova stage sooner than expected — maybe next week, or maybe in only 100,000 years rather than a million years — no one knows.

If it were to explode, you needn’t worry: Betelgeuse is about 700 light years away, and all we’d see here on earth would be a spectacularly brilliant star, visible in the daytime for probably a few months or more, followed by gradual fading over a period of years. I myself would hate to have that happen, because it would forever alter the character of Orion. It’s also important to realize that some astronomers think there probably isn’t anything really unusual happening: after all, we’ve only been taking careful measurements of Betelgeuse with modern instruments for 100 years or so. Changes like this might regularly occur every few hundred or few thousand years — in the blink of an eye, astronomically speaking — and they may simply never have been recorded before.

For now, astronomers around the world are watching Betelgeuse very carefully, monitoring its brightness hour by hour in an attempt to understand what is behind its unusual behavior. If you have a high-school homescholar with a serious interest in astronomy, the place to watch for special bulletins is The Astronomer’s Telegram website — that’s where professional astronomers post rapid reports on the latest observations. The material there is highly technical — I can’t follow a lot of it myself — but that means it’s exactly what you should offer to your young astronomers as a challenge. Here’s the most recent Betelgeuse bulletin as of this writing:

Sometime this month — maybe before it’s too late? — take your homeschool students out at dusk and introduce them to this great orange sun, and teach them its name. It will probably be their friend for life — but if worse comes to worse, you will have at least provided them with a memory of how that part of the sky once looked to us all, ever since the dawn of history.

What stellar observations have you made in your homeschool this Orion Term? 😊

❡ Alpha and beta and gamma, oh my: Most of the principal stars within each constellation have both old vernacular names — Vega, Sirius, Arcturus, and so on — as well as more formal scientific designations. The German astronomer Johann Bayer (1572–1625) devised the formal system of star designations that is still in common use today. In Bayer’s system, the stars in each constellation, from brightest to dimmest, are assigned a lowercase letter of the Greek alphabet: α (alpha, brightest), β (beta, second brightest), γ (gamma, third brightest), δ (delta, fourth brightest), and so on. This letter designation is combined with the Latin name of the constellation in its possessive (genitive) form: Lyra becomes Lyrae (“of Lyra”), Canis Major becomes Canis Majoris (“of Canis Major”), and so on. The brightest star in the constellation Lyra (the star Vega) thus becomes α Lyrae (“alpha of Lyra”), the brightest star in Canis Major (the star Sirius) becomes α Canis Majoris (“alpha of Canis Major”), and so on, through all 24 Greek letters and all 88 constellations. How bright would you expect, say, the σ (sigma) star of Orion to be? Not very bright — it’s far down the alphabet — but σ Orionis happens to mark the top of Orion’s sword, so even though it’s not very bright it’s still notable and easy to locate on a dark night. ✨

❡ Star bright: The brightness of a star as we see it in our night sky is its magnitude — or more properly, its apparent magnitude. The scale of star magnitudes was developed long before modern measuring instruments were invented, so it can be a little bit confusing for beginners. Originally, the brightest stars in the sky were called “first magnitude” and the less-bright stars “second magnitude,” “third magnitude,” and so on, down to the dimmest stars visible to the naked eye, which were called “sixth magnitude.” In the nineteenth century the star Vega (our August star) was chosen as the standard brightness reference and its value on the magnitude scale was defined to be zero (0.0). Five steps in magnitude (from 0.0 to 5.0 or from 1.0 to 6.0) was defined to be a change in brightness of 100 times: a star 100 times dimmer than Vega (0.0) was defined to be a magnitude 5.0 star. Vega is not quite the brightest star is the sky, however, so the scale also had to be extended into negative numbers: Sirius (our March star), for example, is magnitude –1.5, about three times brighter than Vega (at 0.0). The planet Venus at its brightest is about magnitude –4.2; the full moon is about magnitude –12.9; the sun is magnitude –26.7. By contrast, the dimmest stars visible to the naked eye in a populated, light-polluted area are about magnitude 3.0; the dimmest stars visible under very dark conditions are about magnitude 6.5. The Hubble Space Telescope in orbit around the earth has photographed distant stars and galaxies below magnitude 30, the dimmest celestial objects humans have seen so far. 🔭

❡ And all dishevelled wandering stars: How far away are the stars? Do they all occupy a single celestial “dome” that rotates through the heavens (as some ancient and medieval astronomers believed), or are they scattered through space at different individual distances? Astronomers had long suspected that the fixed stars existed at different distances from us, but early attempts to measure those distances failed. It was not until the early 1800s that instruments and measuring techniques became precise enough to allow the first stellar distances to be calculated using the technique of parallax. Parallax is the displacement in the apparent position of an object with respect to the background when an observer moves from side to side. It’s an ordinary phenomenon you experience every day — it’s how we judge distances as we move through the landscape. Stellar parallaxes are extremely small — fractions of an arc-second (one 3600th of a degree) — and they are calculated by measuring a star’s position against the background at opposite sides of the earth’s orbit, six months apart. (That’s the astronomical equivalent of taking one step to the side.) Vega, our August star, was one of the first stars to have its parallax measured; modern estimates put it at about 0.13 arc-seconds. Apply some trigonometry, and that yields a distance of about 25 light years. 🔭

❡ Watchers of the skies: Teaching your students to recognize the constellations is one of the simplest and most enduring gifts you can give them. We recommend the handy Backyard Guide to the Night Sky (riverhouses.org/books) as a general family reference — it will help you identify all the northern hemisphere constellations and will point out many highlights, including the names and characteristics of the brightest stars. Your recommended world atlas also has beautiful maps of the whole northern and southern hemisphere night skies on plates 121–122. Why not find a dark-sky spot near you this month and spend some quality homeschool time beneath the starry vault. 🌌

❡ First star I see tonight: This is one of our regular Homeschool Astronomy posts featuring twelve of the most notable stars of the northern hemisphere night sky. Download and print your own copy of our River Houses Star Calendar (riverhouses.org/calendars) and follow along with us as we visit a different Great Star each month — and make each one of them a homeschool friend for life. 🌟