For educational homeschool entertainment this New Year’s Day, why not invite your students to listen to the great countertenor Alfred Deller singing, in true Renaissance style, an ancient carol that dates back at least as far as the 1640s, set to what is probably the most famous of all folk-tunes, “Greensleeves”:

We’re coming to the end of our Holiday Music Month in the River Houses — it began on the first of December and will conclude this Sunday on Twelfth Night. Throughout the month we’ve been sharing an assortment of seasonal favorites in a great variety of styles and genres — classical and modern, sacred and secular, serious and silly — along with (of course) a collection of educational notes that will help you teach little homeschool lessons all along the way.

Alfred Deller (1912–1979) was a key figure in the twentieth-century revival of authentic early music performance. He sang naturally as a countertenor — the highest male vocal register, overlapping with the female contralto and mezzo-soprano registers — and he recreated for new audiences the popular singing styles of the Shakespearean era.

The old year now away is fled,
The new year it is enterèd;
Then let us now our sins down tread,
And joyfully all appear.
Let’s merry be this day,
And let us now both sport and play,
Hang grief, cast care away,
God send you a happy new year!

The name day now of Christ we keep,
Who for our sins did often weep;
His hands and feet were wounded deep,
And his blessed side, with a spear.
His head they crowned with thorn,
And at him they did laugh and scorn,
Who for our good was born;
God send us a happy New Year!

And now with New-Year’s gifts each friend
Unto each other they do send;
God grant we may all our lives amend,
And that the truth may appear.
Now like the snake your skin cast off
Of evil thoughts and sin,
And so the year begin:
God send us a happy new year!

Here’s a little elementary musical lesson you can teach this week. Different people naturally have different vocal ranges, from high to low. Professional singers can extend those ranges through training, but it is always the case that some people naturally sing at a higher pitch and some at a lower. The male vocal ranges are commonly called, from highest to lowest: countertenor (like Deller, above), tenor, baritone, and bass. The female ranges, from highest to lowest, are: soprano, mezzo-soprano, and contralto. Although these terms are used most often in the context of classical music and opera, they can be applied to singers in popular music as well: country star Dolly Parton, for example, has a strong soprano voice, while the late Karen Carpenter was famous as a contralto. The male countertenor voice is one of the rarest, which is why Deller was so celebrated in his day.

The tune “Greensleeves” is one of the oldest and best-known English folk tunes, first attested in print in 1580. It’s so old and popular, in fact, that it was even mentioned by Shakespeare (in The Merry Wives of Windsor). A great variety of lyrics, both sacred and secular, have been written for it, and it’s been subject to a great many instrumental arrangements, both popular and classical. (“Greensleeves to a Ground” is a particularly popular Christmastime instrumental arrangement.)

What marvelous musical discoveries have to been making in your homeschool during this Holiday Music Month? 🎵 🎄 😊

❡ Musical memories: If you’d like to fill your homeschool with some beautiful background sounds this season, why not tune in to the 24-hour Holiday Channel from WQXR, the famous classical music station in New York City. “Enjoy the sounds of orchestras, choirs, brass ensembles and more as we celebrate the sacred and secular sounds of the season.” I have it on as background music almost all day. Won’t you join me? 📻 🎵 🎄

❡ Stay in the loop: This is one of our occasional posts on Homeschool Arts & Music. Add your name to our weekly mailing list (riverhouses.org/newsletter) and get great homeschool teaching ideas delivered right to your mailbox all through the year. 🗞

Guatemala in Central America is one of our homeschool countries-of-the-week, so why not spend a few minutes today learning about one of Guatemala’s World Heritage Sites: Tikal National Park.

Tikal National Park was one of the centers of ancient Mayan civilization, and it is now one of the great nature conservation areas in Central America:

“Tikal National Park is located in Northern Guatemala’s Petén Province within a large forest region often referred to as the Maya Forest, which extends into neighbouring Mexico and Belize. Embedded within the much larger Maya Biosphere Reserve, exceeding two million hectares and contiguous with additional conservation areas, Tikal National Park is one of the few World Heritage properties inscribed according to both natural and cultural criteria for its extraordinary biodiversity and archaeological importance. It comprises 57,600 hectares of wetlands, savannah, tropical broadleaf and palm forests with thousands of architectural and artistic remains of the Mayan civilization from the Preclassic Period (600 B.C.) to the decline and eventual collapse of the urban centre around 900 A.D.

“The diverse ecosystems and habitats harbour a wide spectrum of neotropical fauna and flora. Five cats, including Jaguar and Puma, several species of monkeys and anteaters and more than 300 species of birds are among the notable wildlife. The forests comprise more than 200 tree species and over 2000 higher plants have been recorded across the diverse habitats.“ (UNESCO World Heritage Centre #64)

World Heritage Sites are cultural or natural landmarks of international significance, selected for recognition by the United Nations Educational, Scientific, and Cultural Organization. More than 1000 such sites have been recognized in over 160 countries, and we post one every Wednesday, drawn from one of our homeschool countries-of-the-week. You can find a complete list online at the UNESCO World Heritage Centre and in Wikipedia.

The World Heritage Centre also has a free and comprehensive World Heritage education kit for teachers, as well as a wonderful full-color wall map of World Heritage Sites (riverhouses.org/2019-wh-map), available for the cost of shipping. Why not add them both to your own homeschool library. 🗺

What world treasures are you exploring in your homeschool this Orion Term? 😊

❡ Books in the running brooks: You can always turn to your River Houses almanac, atlas, and history encyclopedia (riverhouses.org/books) for more information about any of our countries-of-the-week. The almanac has profiles of all the nations of the world on pages 745–852; the endpapers of the atlas are indexes that will show you where all of the individual national and regional maps may be found; the history encyclopedia includes national histories on pages 489–599; and you can find additional illustrations, flags, and other mentions through the indexes in each of these volumes. For an ideal little lesson, just write the name of the Weekly World Heritage Site on your homeschool bulletin board, find its location in your atlas, read the WHC’s brief description aloud, look at a picture or two, and you’re done. Over the course of the year, without even realizing it, your students will absorb a wealth of new historical, geographical, and cultural information. 🇬🇹

❡ The great globe itself: This is one of our regular Homeschool States & Countries posts featuring historic sites of international importance. Download your own copy of our River Houses World Heritage Calendar (riverhouses.org/calendars) and follow along with us as we tour the planet, and add your name to our weekly mailing list (riverhouses.org/newsletter) to get great homeschool teaching ideas delivered right to your mailbox all through the year. 🌎

Happy January and Happy New Year to all our readers and friends! Here are some things to look for in the homeschool month ahead. 🔍 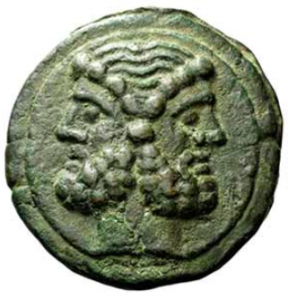 January with 31 days is the middle month of Orion Term, our winter term in the River Houses. Orion Term runs from December through February. Visit our main River Houses calendar page (riverhouses.org/calendars) and print out some of our simple educational calendars and planners — they’ll help you create a light and easy structure for your homeschool year. 🗓

The month of January (Latin Mensis Ianuarius), the “doorway month,” takes its name from Janus, the two-faced Roman god of doorways, passages, exits and entrances, endings and beginnings. Although January has long been regarded as the first month of the year, in the earliest history of the Roman calendar the months were counted beginning with March (the month of the spring equinox) rather than with January. You can learn more about different kinds of modern and historical calendars on pages 350–356 in your (new 2020!) River Houses almanac (riverhouses.org/books). 📚

“He that will live another year
Must eate a hen in Januvere.“

Our Sunday states-of-the-week for January will be Indiana, Mississippi, Illinois, and Alabama, and our countries will run from Haiti to Kenya. Print your own River Houses States & Countries Calendar and tour the United States and the whole world with us from Delaware to Hawaii and Afghanistan to Zimbabwe. 🇺🇸 🌎

We’ll have homeschool poems this month from Philip Larkin, Gail Mazur, James Weldon Johnson, and John Masefield. Print your own River Houses Poetry Calendar and join us as we visit with forty-eight of our favorite friends over the course of the year. ✒️

Our Friday Bird Families this month will include the Shearwaters, Petrels, and Storm-Petrels; the Storks, Frigatebirds, Boobies, Gannets, Cormorants, Darters, and Pelicans; the Herons, Bitterns, Ibises, and Spoonbills; the New World Vultures, Ospreys, Hawks, Kites, and Eagles; and the Owls. (So many wonderful names, yes?) Print your own copy of our River Houses Calendar of American Birds, get out your copy of our recommended homeschool bird guide (riverhouses.org/books), and follow the flyways with us. 🦅

Our monthly Great Star for January is Capella (alpha Aurigae), which we’ll be writing about next week. Print your own River Houses Star Calendar and join us as we visit twelve high lights of the northern hemisphere night sky and make them friends for life. 🌟

Our Dewey Decimal class for January will be the Social 300s — follow along with us (on the first Tuesday of each month) and help your students learn the whole library over the course of the year! 📚

And watch for our monthly Wikimedia Commons Photo Challenge post, coming up this week — it’s a great opportunity for all homeschool photographers. 📸

Also coming up this month:

What calendrical events will you be marking in your homeschool this month? 😊