Today is the most important day of the year for all of the world’s cartoon-loving Classical musicologists — to wit, Beethoven’s Birthday! 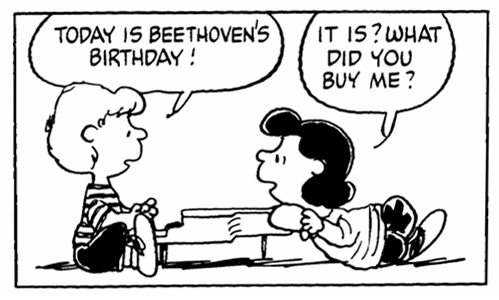 Ludwig van Beethoven, one of the greatest Classical composers of all time, was born on this day in Bonn, Germany, in 1770, and as every lover of the comic strip Peanuts knows, Beethoven’s Birthday was celebrated religiously by the little boy Schroeder, forever practicing on his toy piano for his future career as a concert pianist. His companion Lucy, who adored Schroeder, regarded the holiday with indifference, since Beethoven was her principal rival for Schroeder’s affections.

Whatever you’re doing in your homeschool today, why not set aside six minutes with your students to turn up the volume and watch this delightful performance of the “Ode to Joy,” the fourth movement of Beethoven’s famous Ninth Symphony, composed from 1822–1824. The seemingly spontaneous outdoor concert begins when a little girl puts a coin in a street musician’s hat in the city of Sabadell, Spain, and before you know it, an entire orchestra miraculously appears:

I can’t actually make out the words they are singing in this version — can you? The original words, written by the poet Friedrich Schiller (1759–1805), are in German, and they have been translated, adapted, and rewritten many times. Perhaps they are singing a Spanish or Catalan version? Here’s the first verse of the original German text, with a not-very-poetical English translation:

An die Freude (Ode to Joy)

Joy, beautiful spark of divinity,
Daughter from Elysium,
We enter, burning with fervor,
heavenly being, your sanctuary!
Your magic brings together
what custom has sternly divided.
All men shall become brothers,
wherever your gentle wings hover.

If you’re not in a Classical mood today and are feeling more Broadway, we at the International Beethoven’s Birthday Homeschooling Association give you permission to celebrate with this somewhat more modern Peanuts-inspired work:

What magnificent musical discoveries are you making and what artistic anniversaries are you marking in your homeschool this Orion Term? 😊

❡ Explore more: For a brief overview of Beethoven’s place in the international artistic and philosophical movement known as Romanticism, turn to pages 338–339 in your recommended River Houses history encyclopedia (riverhouses.org/books). 📚

❡ Let the river run: This is one of our occasional Homeschool Holidays & Anniversaries posts. Add your name to our weekly mailing list (riverhouses.org/newsletter) and get great homeschool teaching ideas delivered right to your mailbox all through the year. 🗞

William Billings (1746–1800) was one of America’s first musical composers. Although he earned a living mainly as a leather tanner, he also taught “singing schools” and wrote and published some of the best-known hymns and patriotic songs of the American Revolution. And he also wrote a few Christmas carols. The Tudor Choir, a modern professional singing group from Seattle, gives us a grand rendering of one of them, “Shiloh,” and a taste of what Christmas sounded like in the 1780s:

December is Holiday Music Month in the River Houses, and throughout the month we’re sharing an assortment of seasonal favorites in a great variety of styles and genres — classical and modern, sacred and secular, serious and silly — along with (of course) a collection of educational notes that will help you teach little homeschool lessons all along the way.

Many people who hear Billings’ tunes today think of them as examples of southern “shape note” music — but that’s only partly true. In early America, this a cappella style of choral singing actually began in the northeast and then spread to the southern states, where it came to be called Sacred Harp singing, after a popular early anthology of that name. In the nineteenth century the style became less popular in the northeast, but it retained its appeal in the south, and in modern times it has undergone a great revival across the country and even around the world.

Like all of Billings’ tunes, “Shiloh” is wonderful vigorous music, meant to be sung by people together. The words tell the New Testament story of the annunciation to the shepherds:

1. First Shepherd
Methinks I see an heavenly Host
Of angels on the wing;
Methinks I hear their cheerful notes,
So merrily they sing.

2. First Angel
Let all your fears be banished hence,
Glad tidings I proclaim;
For there is a Savior born today
And Jesus is his name.

3.
Lay down your crooks and quit your flocks,
To Bethlehem repair;
And let your wandering steps be squared
By yonder shining star.

4.
Seek not in courts or palaces;
Nor royal curtains draw;
But search the stable,
See your God extended on the straw.

5. Narrative
Then learn from hence, ye rural swains,
The meekness of your God,
Who left the boundless realms of joy,
To ransom you with blood.

6.
The master of the inn refused
A more commodious place;
Ungenerous soul of savage mold
And destitute of grace.

8.
The royal Guest you entertain
Is not of common birth,
But second in the great I Am,
The God of heaven and earth.

9. Narrative
Then suddenly a heavenly Host
Around the shepherds throng,
Exulting in the three-fold God,
And thus addressed their song.

10. Grand Chorus
To God the Father, Christ the Son,
And Holy Ghost accord
The first and last, the last and first
Eternal praise afford.

What marvelous musical discoveries will you be making in your homeschool during this Holiday Music Month? 🤶 🎅 😊

❡ Musical memories: If you’d like to fill your homeschool with some beautiful background sounds this December, why not tune in to the 24-hour Holiday Channel from WQXR, the famous classical music station in New York City. “Enjoy the sounds of orchestras, choirs, brass ensembles and more as we celebrate the sacred and secular sounds of the season.” I have it on as background music almost all day. Won’t you join me? 📻 🎵 🎄

❡ Stay in the loop: This is one of our occasional posts on Homeschool Arts & Music. Add your name to our weekly mailing list (riverhouses.org/newsletter) and get great homeschool teaching ideas delivered right to your mailbox all through the year. 🗞